Office Hours in Person: 1:30 to 3:30 PM Thursday; other days/times by appointment. Office Hours by Zoom: arrange a meeting by emailing me at cjm5@psu.edu.

My research and teaching areas cross several fields: early modern studies; early American (including African American and Native) studies; and contemporary Native studies. Across my career, I have published eleven books and well over sixty articles and chapters in books on a variety of subjects. I'm very grateful to have been named the 2018 Honored Scholar in Early American Literature by the MLA Forum in American Literature to 1800. My scholarship and my teaching enhance each other, as evidenced by my having been honored with two teaching awards, the Malvin and Lea P. Bank Outstanding Teaching Award, 2016, and the College of Liberal Arts Teaching Award, 2005.

The British Empire remains the focus of my work, most recently from my perspective as a scholar of Benjamin Franklin. I'm now working in the history of science (electricity, particularly) and in understanding better the imperial situation in the Mediterranean arena. My monograph, Benjamin Franklin and the Ends of Empire (Oxford University Press, 2015; paperback, 2019), examines Franklin's attitudes about trade and populations in the context of the growing number of debates about what it meant to be both liberal and British during the eighteenth century. The book's favorable reviews have amply rewarded the two decades I spent writing the book. My monograph in progress, Benjamin Franklin's Electrical Diplomacy, embraces my intersecting interests in the histories of science, politics, material culture, and print media. I have delivered talks related to this book at several locations, including the American Philosophical Society (Franklin's society), Library Company of Philadelphia (Franklin's library), the Joseph Priestley House in Northumberland, Pa., and conferences of the Organization of American Historians, the American Society for Eighteenth Century Studies, and the Pennsylvania Historical Association.

My scholarship on Franklin has benefited from fellowships from the National Endowment for the Humanities, the American Council of Learned Societies, the Andrew W. Mellon Foundation, the American Philosophical Society, and the Library Company of Philadelphia. Most recently, I received an Alexander von Humboldt / Yale Macmillan Center History Network fellowship to assist my research toward a new book on Franklin and the Mediterranean.

Additional work on Franklin includes The Cambridge Companion to Benjamin Franklin (2009) and over twenty essays, chapters in books, and review essays on Franklin.

I won the 2012 Bibliographical Society of America's William L. Mitchell Prize, for scholarship in early British periodicals. The prize was awarded for my essay, "Benjamin Franklin's Savage Eloquence: Hoaxes from the Press at Passy, 1782," published in Proceedings of the American Philosophical Society, 152, iv (Dec. 2008), 490-520.

Undergraduate teaching has enabled me to test my research and pedagogical capabilities in classes that range from the "great traditions" courses for freshmen to the senior seminar in English.  Current areas my students and I are exploring at the undergraduate level relate to the eighteenth-century British novel, contemporary Native studies, environmental studies, critical race studies, enlightenment studies, and studies in the American West.  I also love teaching the undergraduate literature survey, because I think undergraduates' experience of literary history reveals much about today's culture and the crisis in literary and history education.

I like to challenge students to think about ethical matters as these relate to literature and culture. In several of my courses, the students have worked on projects associated with our coursework, most recently in a course in Native studies, where we examined the problems of settler colonialism.

I have directed fifteen honors theses for the Schreyer Honors College.  Some of these students went on to graduate school, some entered the business world, some became teachers, one entered the Peace Corps, and another was awarded a Fulbright international scholarship.

My courses at the graduate level introduce students to topics in conversation among scholars, and many students who take my classes go on to publish their essays in scholarly journals. Indeed, more than fifteen students from former seminars have published papers originally written in my classes.  But publication is only one goal of my pedagogy.

My primary goal is that students develop mastery of the field by engaging collaboratively in their learning experiences.  My courses in the last several years have related to the British and American eighteenth-century novel, imperial enlightenments, early environmental writing, literacies in early American studies, and the history of science.

I have directed dissertations in several fields, including the area of my own dissertation specialty (transatlantic eighteenth century and enlightenment studies), along with nineteenth- and twentieth-century American studies, and African American, Native American, and Asian American studies. My students have flourished in their careers, having benefited from the range of opportunities Penn State graduate study in English has offered them.

Alex Sibo earned the PhD in May 2022. Alex's thesis, “Mary Wollstonecraft: Social Reproduction Pedagogy," examines the life and writings of Wollstonecraft for the methods by which she engaged in pedagogical inquiry about culture and learning. Alex studies and writes in the pedagogy of literature and composition as evidenced by an essay called "The Literacy Load is Too Damn High!" published online in PARS in Practice: More Resources and Strategies for Online Writing Instructors. Alex was honored with the 2020/21 Cindy and Dickie Selfe Fellowship in support of scholars from historically marginalized communities, and more recently, Alex won the College of the Liberal Arts Denise Haunani Solomon Outstanding Teaching Award for Graduate Students for 2022.

Mark Sturges earned the PhD in American literature of the environment and environmental studies in 2013. Mark has already won a "best article" award for an essay that began as a seminar paper in my 2009 graduate seminar, "Nature's Nation." Check out his brilliant essay on Jefferson in the Virginia Magazine of History and Biography. Mark is a tenured Assistant Professor of English and Environmental Studies at St. Lawrence University.

Mathew C. RudeWalker earned his PhD in 2013 in Native studies. Mat is interested in historicizing contemporary Native sovereignty and resistance efforts by revealing a persistent pattern of resistance against land takeovers from the seventeenth century onward. Mat was a Post-Doctoral Teaching Fellow at Penn State for a time, and he is currently an assistant teaching professor at Kennesaw State University.

Rochelle Raineri Zuck (PhD 2008) is Associate Professor of English at Iowa State University in Ames, Iowa, where she moved in 2019 from her tenured Associate Professor position at the University of Minnesota, Duluth. She teaches courses in American literature and culture with particular emphasis on literature of the nineteenth century. Her first book, a significant revision of her dissertation written at Penn State, was published in 2016 as Divided Sovereignties: Race, Nationhood, and Citizenship in Nineteenth-Century America by the University of Georgia Press.

Steven Thomas (PhD 2006) is currently Associate Professor and Interim Chair of English at Wagner College, where he moved from his tenure-line post at the College of St. Benedict/St. Johns University in Minnesota. Steve's dissertation was on the literature of British imperialism of the seventeenth and eighteenth centuries, but he has a variety of interests, including the work of Oromo immigrants to America from Ethiopia, the literature of the Harlem Renaissance, James Bond, and media studies. To help him complete his book-in-progress on the impact of Ethiopia in American literature, Steve was granted a Barra Sabbatical Fellowship from the McNeil Center for Early American Studies at Penn (for 2018-2019).

Youngsuk Chae (PhD 2005) published her dissertation as her first book, Politicizing Asian American Literature with Routledge in 2011. Professor of English now, she is currently Assistant Chair of her department at the University of North Carolina, Pembroke.

Cedrick May (PhD 2003) also published his dissertation as his first book, Evangelism and Resistance in the Black Atlantic, University of Georgia Press, 2008. Cedrick is Professor of English and Digital Arts at the University of Texas at Arlington, his alma mater. Cedrick gained national attention for his archival discovery of materials by Jupiter Hammon, an enslaved African, and he has given interviews with media outlets such as the New York Times and National Public Radio. His edition of Hammon's writings was published as The Complete Works of Jupiter Hammon in 2017. Most recently, Cedrick has turned his attention to film and has won awards for several of his film-making projects.

Elizabeth Archuleta (PhD 2002) resigned her tenure-line assistant professorship at Arizona State University to develop a private business in diversity training. Since then she has come back to academia, where she works in the office of the Center for Excellence in Higher Education at the University of Utah.

Amy E. Winans (PhD 1998), a skilled early Americanist with an interest in African American studies, progressed to Associate Professor of English at Susquehanna University prior to her untimely death in March 2015.

Nicholas Rombes (PhD 1994), my first dissertation student at Penn State, wrote on Enlightenment culture for his thesis. He has since published books on the Ramones and media studies. He has special interests in cinema in our digital age. Nick is Professor and has served for many years as chair of his department at the University of Detroit Mercy.

The history of print media and the history of reading, studies in the British empire, Enlightenment studies, and gender studies.  Dissertations directed in the field include those written by Steven Thomas, Angela Vietto, and Nicholas Rombes.

Colonial studies through the nineteenth century, with specialties in early African American, Native American, and women's studies, in addition to scholarship associated with environmental studies, the history of science, the history of the book, and early modern liberalism. Dissertations directed in these fields include those by Cedrick May, Amy E. Winans, Steven Thomas, and Rochelle Zuck. More recently, Mark Sturges's thesis, Dwelling on the Land, explored environmental writings from the eighteenth and nineteenth centuries and examined the twin concerns of environmental conservation and the formulation of land policies. And Mathew C. RudeWalker's thesis, Where Our Dead Lie Buried, examined Native discourse and activism over language and land appropriation.

Winner of the 2012 William L. Mitchell prize awarded by the Bibliographical Society of America every other year for the best publication in British periodicals. Work in the field includes studies of manuscript culture and scribal publication along with studies of print media.  Dissertations directed in this area include those by Amy E. Winans and Steven Thomas. 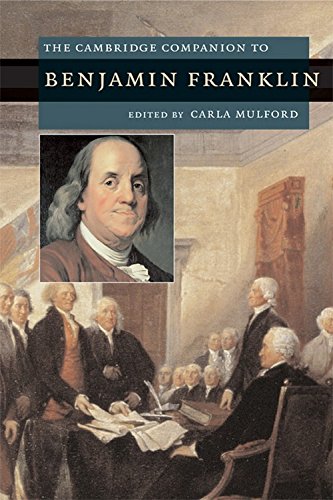 The Cambridge Companion to Benjamin Franklin

The Cambridge Companion to Benjamin Franklin